These are general neworking-related posts. Archive for 2014.

After reading about how more people used mobile data to wish their friends a happy new year, I expected traffic at the Amsterdam Internet Exchange to go up a bit after midnight. But it actually dropped noticeably the first 20 minutes or so of the new year:

And it was a good deal lower than on a regular night to begin with.

Beware of the DFS band if you want gigabit Wi-Fi

I got an Apple Time Capsule 802.11ac "gigabit Wi-Fi" base station this summer, and then a new 802.11ac-capable MacBook Pro (read my review) a few months ago. Those two can communicate wirelessly at a blistering 1.3 Gbps. Sweet!

Belgium is leading the world with double digit IPv6 adoption

Although the number of top 100 websites that have IPv6 enabled has stagnated since World IPv6 Launch, the number of users that have the new protocol enabled keeps growing nicely: during the weekends, now 3% of Google's users have IPv6 according to the search company's IPv6 adoption statistics. (It's a bit lower during the work week, probably because more people have IPv6 at home than at work.)

And for the first time I saw a country pushing past 10% IPv6 adoption. Which country? Belgium! 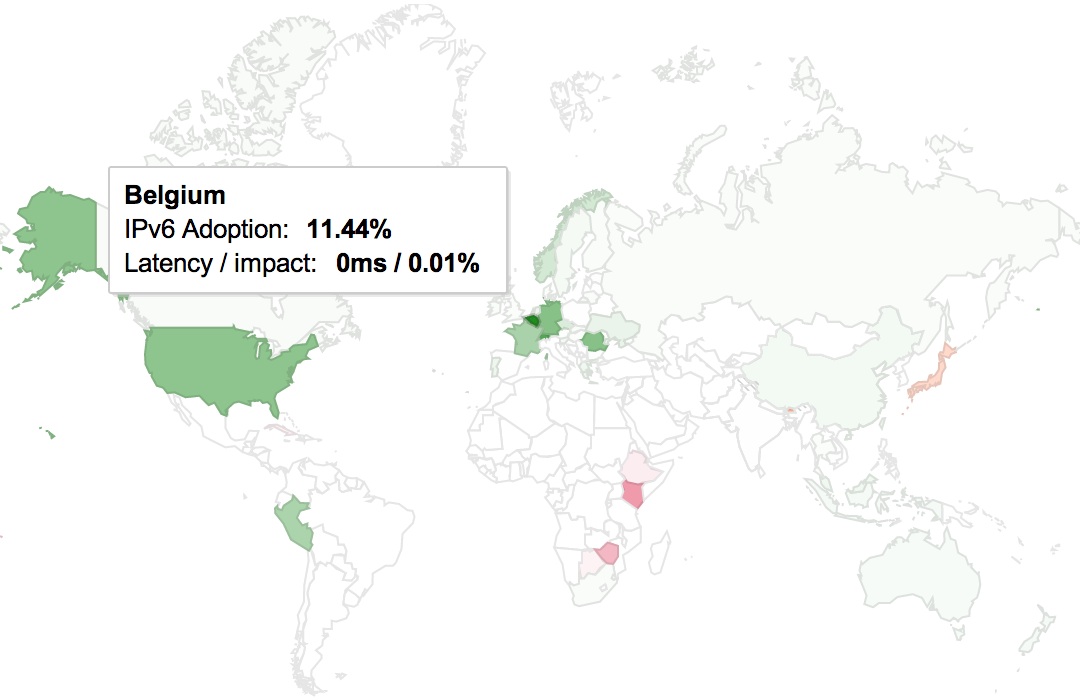 How power-hungry are various permutations of Ethernet on modern MacBook Pros? Tests performed and written up by Jeroen van der Ham and Iljitsch van Beijnum. 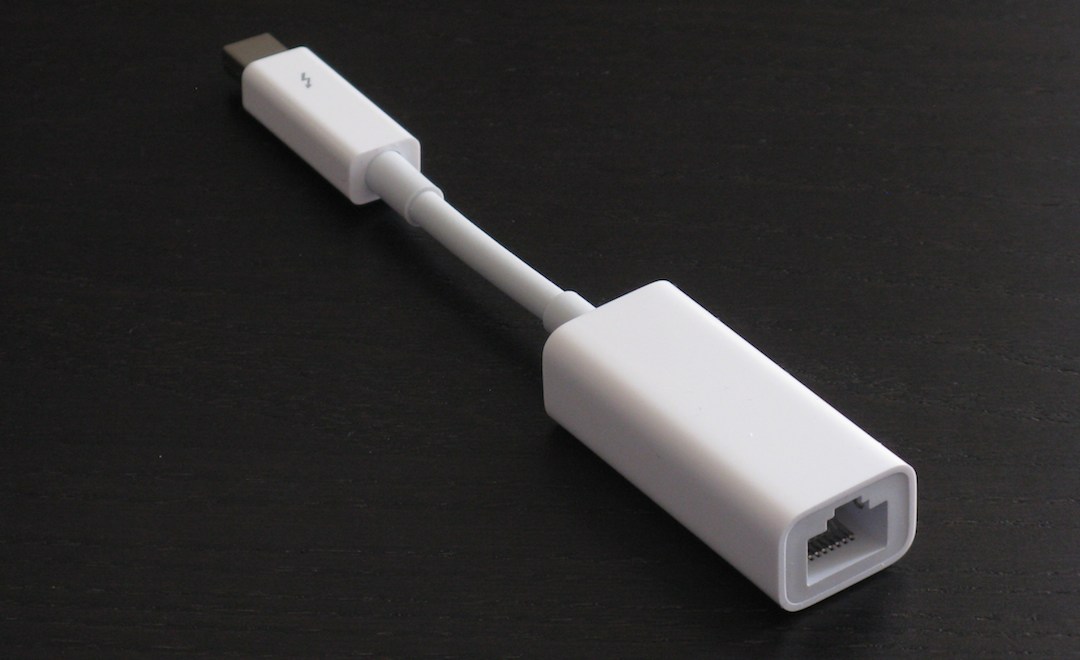 With North America out of IPv4, do we trade, translate or transition to IPv6?

It's official: for all intents and purposes, North America is out of IPv4 addresses. Two of the four other regions have been in that situation for some time, and Latin America will be joining North America, Europe and Asia in about a month. That leaves Africa, which still has almost 50 million IPv4 addresses, which are used up at a rate of 5 - 10 million a year.

Does this mean that if you're running a business that requires a regular infusion of new IP addresses, it's time to relocate to Africa?

At the February NANOG meeting, Geoff Huston talked about BGP in 2013. For a quarter of a century, there have been concerns about BGP hitting scalability issues. The Internet Architecture Board even organized a meeting to discuss the issue in 2006. However, Geoff argues that the current growth is not presenting any immediate problems: "Nothing in BGP looks like it's melting".

A few weeks ago, I wrote With the Americas running out of IPv4, it's official: The Internet is full for Ars Technica, where I explain where all the IPv4 addresses went. 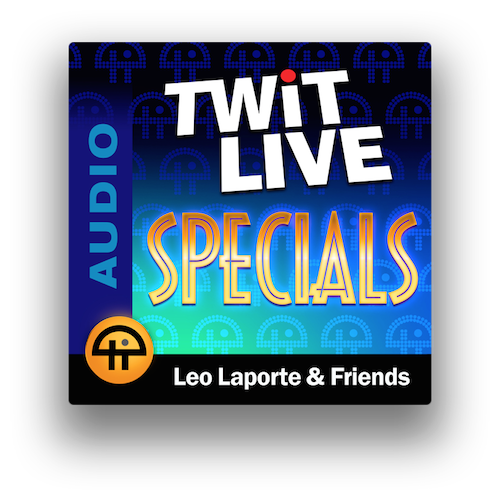 In the comments, a reader posted a link to an interview with Vint Cerf where Cerf explains how we ended up with the limited 32-bit IPv4 address space. Well worth a listen. The 32-bit thing starts 26 minutes in. Basically, IPv4 is the test version of IP, and IPv6 is the production version!

It's never a good sign when the regular press reports about BGP-related issues, such as last week: Browsing speeds may slow as net hardware bug bites (BBC). The problem is that the BGP table has started to hit the 512k FIB limit in some older routers. Numerous outages and slowdowns were reported to be caused by this, but it's unclear to which degree that's accurate.

→ IPv6 adoption starting to add up to real numbers: 0.6 percent

Last week a SIGCOMM paper was published with a bunch of IPv6 measurements in it, which concludes that IPv6 deployment is getting real. For instance, 0.6% of internet traffic was IPv6 at the beginning of 2014, which is 5 times more than in 2013 and that 5 times more than in 2012. Click the link to read my story about this on Ars Technica.

A decade of bandwidth growth

Next week I'm doing a guest lecture about the infrastructure of the internet. Turns out that I already talked about that in 2003 (PDF). One slide in that presentation caught my eye: 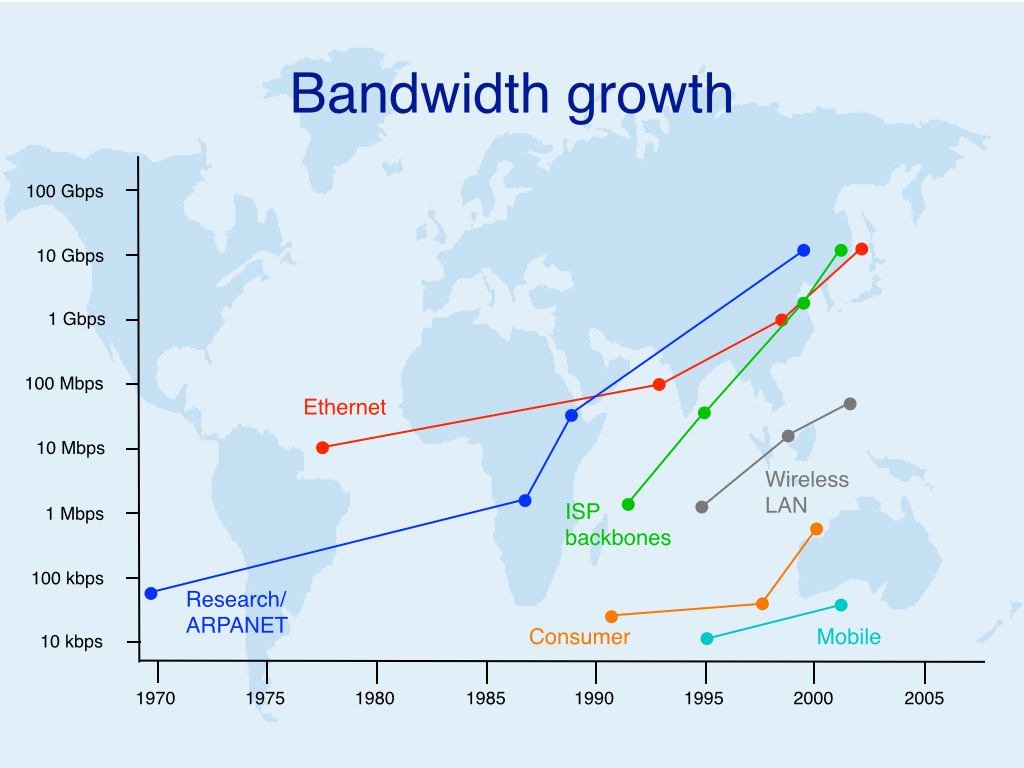 The image shows how bandwidth in research networks and ISP networks has grown, as well as the bandwidth provided by technologies such as Ethernet, Wi-Fi, mobile data, and consumer internet access. All of them show a healthy growth, although some start from extremely modest beginnings.

So I wondered what happened in the intermediate decade...

This week, the Amsterdam Internet Exchange is renumbering its peering LAN.

An internet exchange (IX) is simply a very big Ethernet. Members connect a router port to that Ethernet, and can then exchange packets with each other. When you want to exchange traffic with many other networks, obviously this is more efficient than setting up dedicated connections with all these other networks.

However, sometimes someone makes a mistake...

What makes for an undeployable protocol?

I'm in Honolulu for the IETF meeting this week. As always, on sunday morning before the meeting proper starts, there's the IEPG, where there's always interesting stuff being presented, usually from the operational side of networking.

Today, there were talks about IPv6 packets with extension headers being dropped, routing table and packet size issues by Geoff Huston, and a discussion on Shim6 and Multipath TCP (MPTCP) failure recovery by Brian Carpenter. All good stuff. However, at the end of Brian's presentation, Lorenzo Colitti thanked Brian for the interesting presentation about the performance of undeployable protocol A vs undeployable protocol B.

Maximum packet sizes on the internet

After some heated discussions about packet sizes on the mailinglist of the IETF v6ops working group, I decided to do some measurements to find out what maximum packet sizes are supported on today's internet...

Please read yesterday's post Maximum packet sizes on the internet first. There, I looked at the maximum supported packet sizes that are included in the TCP MSS option in HTTP requests to my server. Today I'll look at the values in ICMP(v6) "too big" messages.

In almost a week, I received zero IPv4 "too big" messages.

So it seems in the IPv4 world, path MTU discovery is dead.

So it seems in the IPv4 world, path MTU discovery is dead.❞

However, João Taveira Araújo told me that he sees a good number of IPv4 ICMP "too big" messages. Those seem to result from SSL traffic. At first, that seemed strange, as SSL is just payload for TCP so TCP MSS clamping should work on SSL sessions the same as on non-SSL sessions.

But then I realized that this traffic could be SSL VPNs. If a VPN gateway takes an IPv4 packet and encapsulates that in SSL in a single TCP segment, then the size of those TCP segments isn't influenced by MSS clamping, so too big messages will be generated if the path MTU is smaller than the MTUs of the endpoints of the SSL connection. I wonder if those SSL VPN implementations handle path MTU discovery properly, though.

The iPhone 6's networking can be very fast, but it all depends on the SIMs, Wi-Fi base stations, frequency bands and transfer protocols.